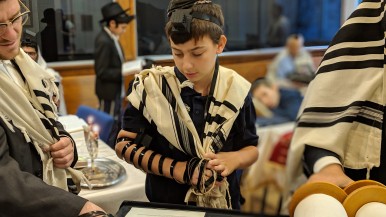 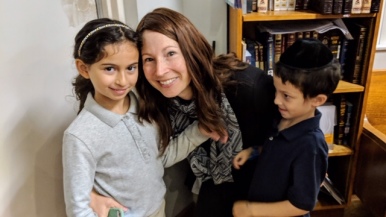 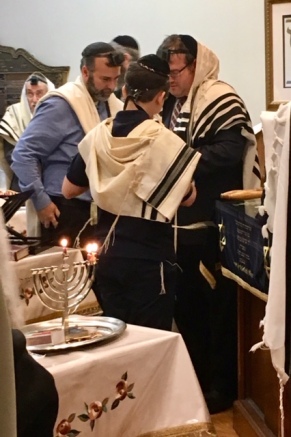 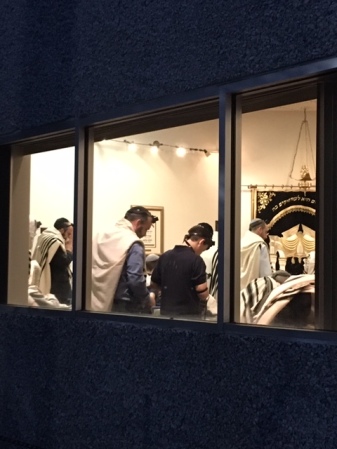 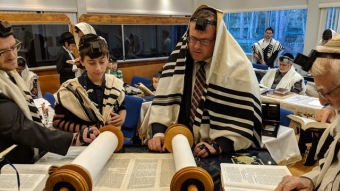 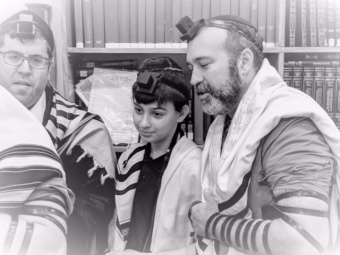 It wasn’t what I always thought of when I heard the term Bar Mitzvah. Without much fanfare, as it became the second night of Chanukah, our son’s 13th Hebrew birthday marked his official transition into this new world.

He attended mincha/maariv (back-to-back evening prayers) at Chabad of Jacksonville with one of his friends from school. During mincha as the sun slowly set, he was a boy. But as evening turned to night and maariv began, he was now counted as part of their minyan. He came home to tell us, his face beaming with pride.

With all the preparations for his upcoming “Bar Mitzvah” on Shabbat — the planning, the shopping, the stress — we hadn’t fully grasped the true meaning of this milestone, and how it comes upon all Jewish boys simply by turning 13 — no fancy party required.

This morning Alex went to Etz Chaim with Danny, who taught him to put on his new tefillin. They were prepared in Israel, arriving after several months just in time. For the past 10 years, Danny has had the same learning partner through Oorah, accumulating points for each minute learned and logged, which can be used towards prizes. After thousands of points accumulated the past decade, he finally traded them in for Alex’s new tefillin.

I was there this morning, sitting peacefully in the women’s section with our younger children. It was a meditative and moving experience for me, praying at dawn during this special time. And I watched in awe as these men — doctors, physical therapists, lawyers, rabbis, teachers — who all come together to pray every morning and evening, are here at 6:30 a.m., before heading to work and facing the chaos of the day.

Alex was called up to the Torah for the first time. He didn’t chant the parsha he has carefully studied the past year — that will come later in the week in front of the greater community, family and friends. But there he was, getting his first aliyah. The emotion I felt surprised me — there in this small room so full of holiness was my little boy, now not little anymore.

At age 13, his is now officially part of the privilege and responsibility that comes with living a Torah life — a life of goodness and service, a life where each action now counts as he G-d willing fills his cup with good deeds.

The past 12 years, since Alex was a baby, Danny and I have worked to be part of religious Jewish life — the culture, the mesorah (tradition), the community. We made the commitment, already married with children, to build a family based on Torah values — to keep Shabbat, kosher, and many other small and large aspects of Torah life. It has been a process of growth and education.

One thing I have learned is that shalom bayis, peace and love in the home, should come first. Kids should marinate in love, and living a Jewish life is meant to be an expression of that. It’s a lesson I continue to learn, forget, and learn again.

So now as we prepare for our son to go before the community, then celebrate with food and drinks, I am trying to remind myself to be with simcha, with happiness, to focus on the beauty and meaning of the milestone.

He’s not just having a Bar Mitzvah, but ‘becoming’ a Bar Mitzvah. He’s no longer just our son, but a Son of the Mitzvahs, which (please G-d) he will continue to perform with simcha and kindness throughout his life. And that’s a reason to celebrate.

Thank you to Rabbi Fisch and Rabbi Feigenbaum with Etz Chaim, Rabbi Cohen with the Jacksonville Kollel who worked one-on-one with Alex to learn his parsha, Rabbi Hauptman his principal and Rabbi Levin his teacher at Torah Academy, Rabbi Applebaum who helped him adjust his tefillin for its first use, Rabbi Browd with Chabad of Jacksonville who shares chassidus with us, Rabbi Bauman who worked with Alex in Norfolk, and Shimon Weinstein, Danny’s longtime chavrusah who is IY”H coming from Lakewood for the simcha.

A little about those black boxes from Chabad.org:

You have a brain. It is in one world. Your heart is in another. And your hands often end up involved in something completely foreign to both of them. Three diverse machines.

So you put on tefillin. First thing in the day, you connect your head, your heart and your hand with these leather cables—all to work as one, with one intent: a dedicated service of the Almighty. And then, when you go out to meet the world, all your actions find harmony in a single coordinated purpose…

One thought on “A Reason to Celebrate”