As I walked into Chabad Jewish Center of West Pasco last month, my eyes searched the crowded room for her. And there she was, the beautiful brand-new Torah, set delicately on the table awaiting her final letters. My seat was right near her, and I was able to glimpse the intricacy and contrast of the black letters on the beige parchment.

This Torah, I realized, contains precisely the same letters and words as every Torah in the world, now and for thousands of years prior, since we received our special instructions from G-d at Mount Sinai.

Just like the letters in the Torah, “We as a Jewish people are not whole unless every single one of us is accounted for,” said Rabbi Yossi Eber, who has run Chabad Jewish Center of West Pasco for the past 13 years with his wife, Dina.

“What can be a better Bar Mitzvah gift than a Torah?” Rabbi Eber said during the event.

Robbie Lichter of New Port Richey generously and lovingly helped the Ebers purchase the new Torah. He spoke passionately to the crowd, saying he just wants more people to do something Jewish – go to synagogue on Shabbat, try eating kosher, give tzedakah, smile at someone.

After 40 years of being disconnected from Judaism, he wept as he placed the final letter onto the Torah parchment during the event.

After 13 surgeries and being told over a decade ago that he had six months to live, this man was dedicated to using his remaining time here the best way possible – with generosity and by living a Jewish life.

“We met by a miracle. I was praying to see a rabbi,” Lichter told me about his time in the hospital last year. It turns out that Rabbi Eber had driven someone in the community to a doctor’s appointment, and while he was waiting, he stopped at the hospital to see if he could find any Jewish patients. That’s how the two men met, put on tefillin together, and an ongoing relationship ensued.

“For the Torahs that burned in the Holocaust, we made one come alive,” Lichter said.

I was fortunate to witness this first-ever Torah dedication in Pasco County for this synagogue that was such an important part of shaping my Jewish journey. Soon after moving to Trinity from New York in 2006, Rabbi and Dina Eber hosted my husband, me and our two children for one of our first-ever Shabbat meals, showing and teaching us by example how beautiful a Jewish life can be.

We absorbed their ongoing inspiration and friendship and went on to become Shabbat observant, to keep kosher, send our children to Jewish schools, and to strive to learn about all the mitzvahs.

My husband and I, along with several others in attendance at the recent dedication, completed writing some of the last letters in this new Torah before it was lovingly adorned in silver crowns and carried in a festive outdoor precession beneath a chuppah.

Men, women and children danced joyously for nearly an hour to live music as the new Torah was carried and passed carefully to various people.

I learned from the scribe who was there that there are 304,000 letters in each Torah, they are written using goose feathers, and the ink is made of walnuts. Torahs typically take 10 months to complete.

Seeing this brand-new Torah up close and experiencing the joy in her completion was a jolting reminder of why I make Judaism such an integral part of my life.

“I feel like a million bucks,” said Lichter, who continues to have ongoing pain and health problems, but shows up for Shabbat services every single week.

At the closing of the festive event, which drew more than 200 people from the community and beyond, including local government officials, Lichter said goodbye to friends and family who had come to witness his generosity and this important milestone.

After 13 years of borrowing Torahs, Chabad Jewish Center of West Pasco, which has been growing to suit the community, now has one of its own.

“It just had to be done,” Lichter said. “I’ll be able to have a good night’s sleep.”

For more information about services, classes and programs at Chabad Jewish Center of West Pasco, call (727) 376-3366 or visit http://www.chabadwp.com. 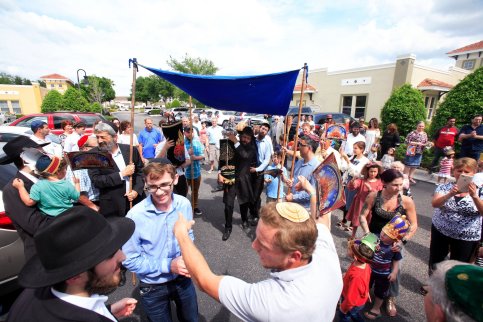 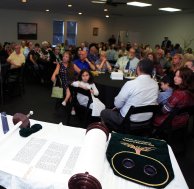 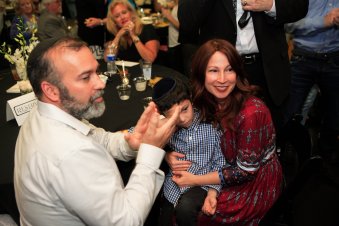 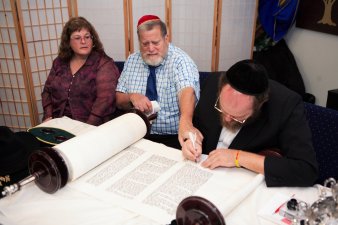